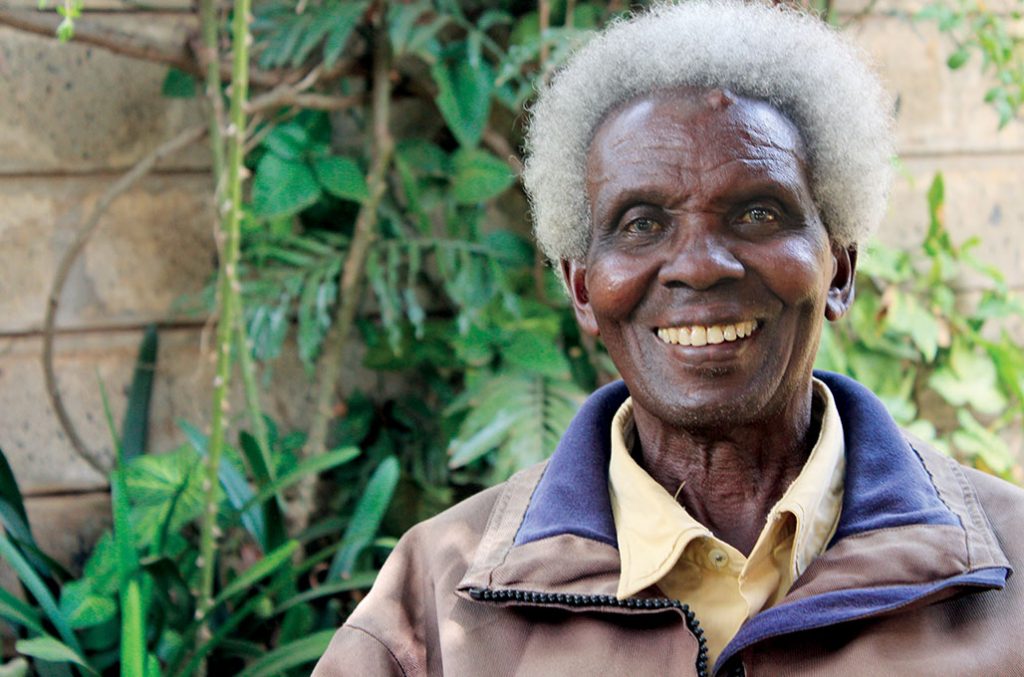 I remember seeing soldiers coming home after the war in 1945 when I was a young boy. We were scared. We were told that Hitler and the French and British would be coming to Nairobi to have some tea and that we should put out our lamps. The French ended up settling in Isiolo, the Germans in Kilimanjaro, and the British Empire took over our country. That was a big deal—it shocked us all. We used to eat our food in the dark because we were afraid of getting bombed.

Later, there was war between the Mau Mau and the British. I was arrested in April 1954 by the British Air Force because I was a Mau Mau soldier. I was detained for almost four years.

Death can shake you and leave you in deep sadness. Your blood loses its strength for a while. But God gave me strength, and I was able to bear it. That experience taught me that there is nothing too big to handle. Anything can happen at any time. You have to find the strength in you.

Desmond O’Grady is a Jesuit priest who served in many prominent positions throughout Ireland. He was recently diagnosed with Alzheimer’s. He shares what living with the disease has taught him and how it has changed the way he lives life. [Interviewer] And that’s the great thing about being open about it. You know, once it’s…

On one of these visits, we found a young woman with four children who had nothing to eat. The mother was crying and showing us the empty pots. I looked at Anna, and she looked at me. There was a lady nearby selling jackfruit, and we asked the lady for a piece. Anna shared the…

Eugenie Carmel Gazal is no stranger to work and struggle. In this brief video, she describes how her mother’s example inspired her to start a second career late in life.

Before I started making pottery, I had the idea that you had to make a perfect pot. Over time I have come to realize there is no such thing as a perfect pot. There is a relationship between the potter and the clay, and the clay has a mind of its own. You can shape…

Desmond O’Grady is a Jesuit priest who served in many prominent positions throughout Ireland. He was recently diagnosed with Alzheimer’s. He shares what living with the disease has taught him and how it has changed the way he lives life.

I met her on a blind date. One blind date, and we just walked in for life! They talk about love at first sight. Well I’ll tell ya—that was it! She was the girl I didn’t even know I was looking for until I saw her. It was God’s gift. A lot of people say,…